Are you a Filipino living in another part of the world other than the Philippines? Living in more developed places outside the Philippines is what most Filipinos desire.  They seem to always think that it is the best way to earn a better living for their family.  Some are content with what they have in the Philippines but most are always aiming to get out of the country for better opportunities or a greener pasture.  It may not mean for everyone that they will have better jobs than what they do in the Philippines, but it usually means better living or better earning.  Some migrate to other countries and later sponsor their families to join them, and some move for temporary work opportunities.

Did you have the feeling that as soon as you moved, life becomes better? I thought that was the case when I moved to Canada and later moved to the US.  It was probably a lot better in terms of comfortability and opportunities to make money, but there are many consequences to deal with and it is something that you need to constantly face while living in a foreign land.  Well, many Filipinos by blood were born here and they don’t really need to deal with the consequences.  But for me, after having my life evolved in a Filipino environment pretty much half of my life and now, living in a foreign land for the rest of my life probably, I had to deal with homesickness a lot.  It was not just missing the people you left behind, but missing the culture, the language and the life that you once had in the Philippines.  And yes, even the hardships, they were much to bear, but they were pretty much a part of what I miss.

Free fresh vegetables from a friend’s backyard!  Moringa is abundant in California.

Where I live now, I would always think of some ways how I can be involved in the Filipino culture.  My parents live in California, a home to many Filipinos.  I think there are many things to see in California and living the Filipino life there is closer to me than flying many more miles away to the Philippines.  There is no place like the Philippines for those who grew up there, but of course living abroad won’t hinder you from doing, reminiscing and living the life you once had with people you can pretty much relate with.  When you are abroad, it is a lot more fun to reminisce about everything Filipino because you see too much variation as compared to another culture, and therefore every Filipino thing you do becomes extra special.

The following is a list of the states with significant Filipino American populations, at over 75,000 people of Filipino descent in 2010.[1]

It doesn’t matter where I live in the US, but seeing the total number above gives me hope and that, I am not alone here and there are opportunities to see or meet some of them at any time.  It is nice to go there and  see Hollywood, Disneyland, the big forests and mountains, and most especially the beaches which remind me a lot of the Philippines.  It becomes a more fun adventure for me because of the thought of getting to see many Filipinos there which means the ambiance of the culture is evident.  It is not that I don’t love other cultures because I do, but because I am a Filipino and if there is an opportunity to enjoy with all the rest, then it is the best thing I could do.  I visit California mostly in the summer times.  The weather may be a lot hotter than where I live now, but the thoughts to see the farms that grow Filipino or Asian vegetables encourage me to have trips during these times.  I grew up on a farm, and I think the opportunity to go and enjoy the fresh vegetables I always miss from that time is the best experience I could ever have.  Visiting the farms makes me get to see and eat fresh fruits like blueberries, grapes, oranges and peaches also.  I remember what it means to be in the Philippines, it just reminds me of how expensive these fruits are and it is not the typical fruits we usually eat.  We are pretty content to having mangoes and bananas there.  Now that I am in the US, I miss these fruits a lot.  Bananas are abundant in all stores across the United States, but native mangoes are rare to see.  California Asian stores like Seafood City sell them.  Seafood City has many branches in the United States and soon to open a branch in Mississauga, Ontario Canada.  Hurray for the many Filipinos in Ontario, Canada.

Try some Filipino burgers and fried chicken at Jollibee! And yes, they serve rice not just french fries 🙂

Delano, California is a growing city  for Filipinos.  It is not that big of a city, but because of the grape farms there, Filipinos migrate to this location for an opportunity to work in the fields.  We stayed there for a couple of days, enjoyed tropical vegetables, Filipino fresh foods, and karaoke which is pretty much a favorite past time of everyone in the neighborhood.  They pretty much do parties outside like how we do in the Philippines .  I was kind of concerned if a neighbor would call the police because the karaoke system was on well past midnight.  They said that if there were other people in the area, they were Mexicans and they understood each other.  Nobody reports them at all.  There is a big Filipino Community there that initiates Filipino Cultural Shows and Festivals and many of these shows are visited by Filipinos from all over California.

Sacramento, California was fun to see with the presence of the Seafood City (a Filipino Marketplace) and a Chowking, Barbecue Grill, Jollibee and Red Ribbon nearby which are Filipino Food brands.  Seafood City is the biggest and most well-known marketplace for Filipino stuff in the United States.  If you want that Filipino food you are craving or you may want something to bring home (if you live in a place where buying Filipino stuff is nowhere), then make sure you search for a Seafood City marketplace when you travel in the United States.  There are many Filipino Restaurants as well in California.  Some of them are great to try.  We were pretty content with Chowking and Red Ribbon on our last visit.  Jollibee is something to try for a burger and fries (Mc Donald’s local competitor in the Philippines). 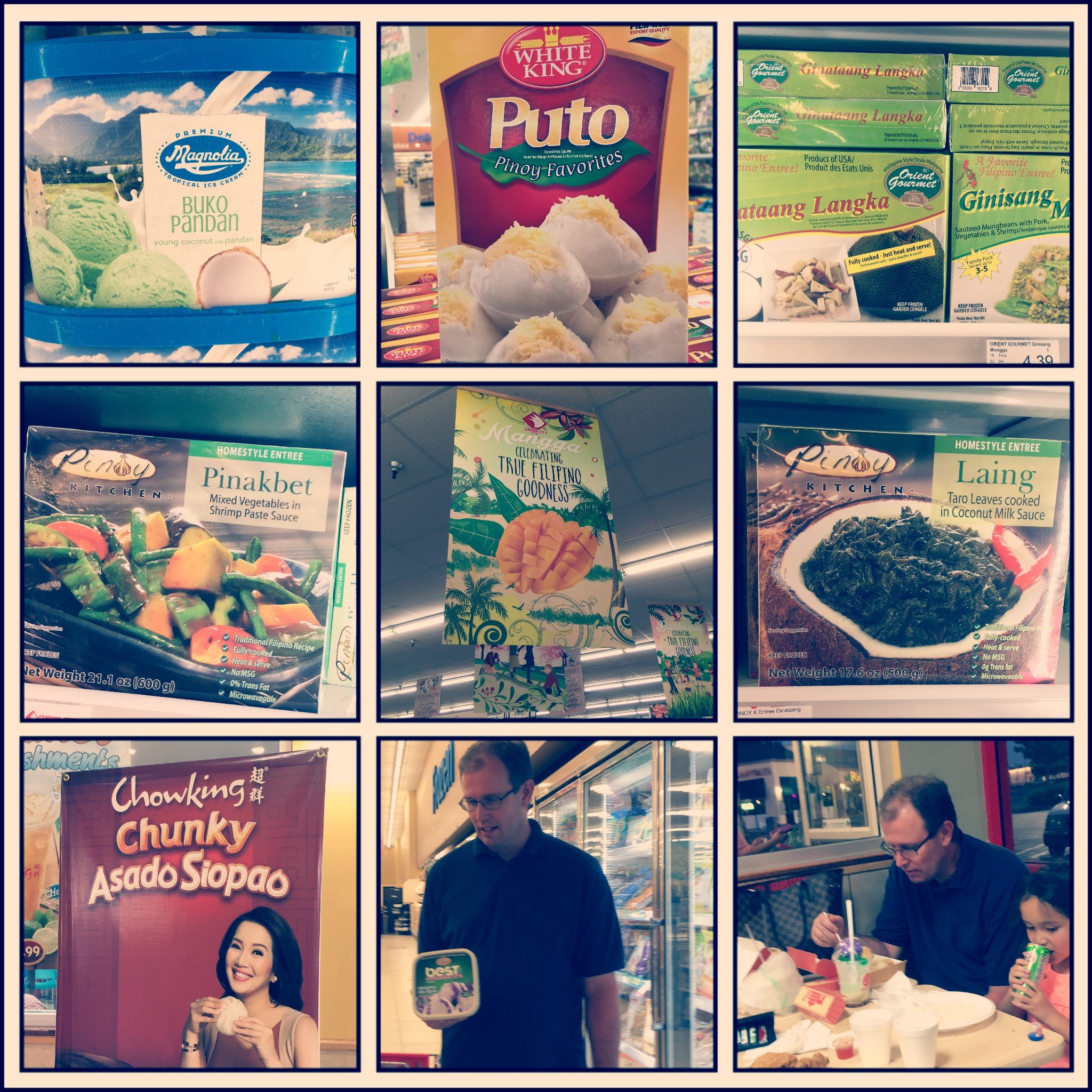 You don’t have to sacrifice your cravings for Filipino Foods! Seafoods City is everywhere in California and the United States.

Nationally, Filipinos rank second to the Chinese in terms of Asian immigration to the US. There are roughly 2.5 million, not counting undocumented, Filipinos in America. Filipinos also lead in terms of foreign workers worldwide. Of all the many places in the US that Filipinos may settle when they move to the US, they opt to settle in the most expensive places which are California and  Hawaii. These places are the top 2 in our figures above where Filipinos live.  They don’t mind about the expensive lifestyle.  By nature, many Filipinos love big cities.  It gives them the picture of a more advanced lifestyle and living in these places mean a city life with a lot of opportunities.  I got an opportunity to talk with friends who are nurses by profession in Hawaii and they told me how expensive it is to live there and California is the same.  Why won’t they move to other places to have a more affordable living?  They don’t mind the expensive lifestyle as long as they get to enjoy the huge Filipino community there, plus a perfect weather for them that they could enjoy all year round.  This means that Filipinos by nature are tied to the culture and if there are possibilities to be tied with what they used to have in the Philippines, then you find them in those places.

Filipinos love karaoke and rice at all times.

Filipinos may have the American dream, but they are content with just having a job and having the means to maintain a low living maintenance to survive.  Some of them are pretty good about working towards owning their homes after years of settling.  They sponsor their families and they live together for a while.  They don’t mind a small space when they are first starting out.  They work hard and you will be surprised one day that they can afford to buy their own house.  Our thought is to adopt all members of our family from the Philippines because we want to provide them the opportunity we are having.  We don’t tell them that we have the easiest life, but having the opportunity to make enough money to survive and throw some money to help our needy relatives in the Philippines is a great feeling that you won’t have a lot in the Philippines because of the rare opportunities.

If the Enchanted Kingdom in the Philippines is visited mostly by Filipinos, it is every Filipino’s dream to see Disneyland. It is where dreams come true!  – Who knows if this is their secret!